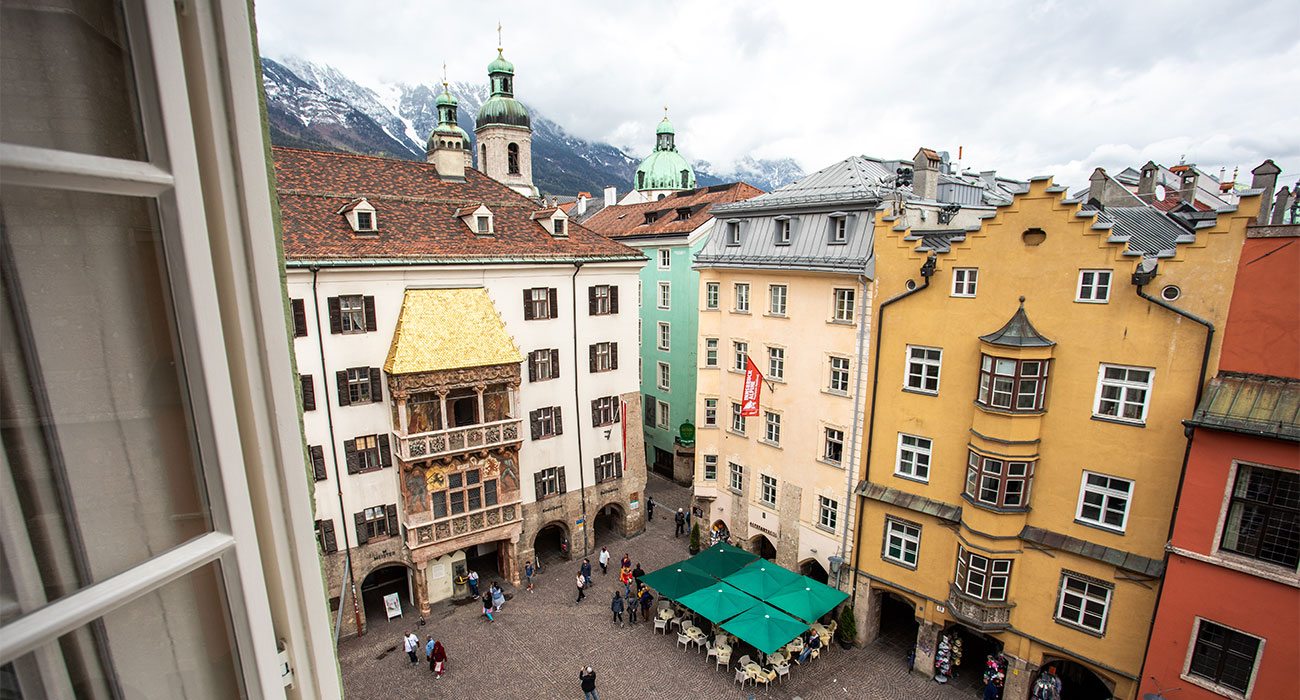 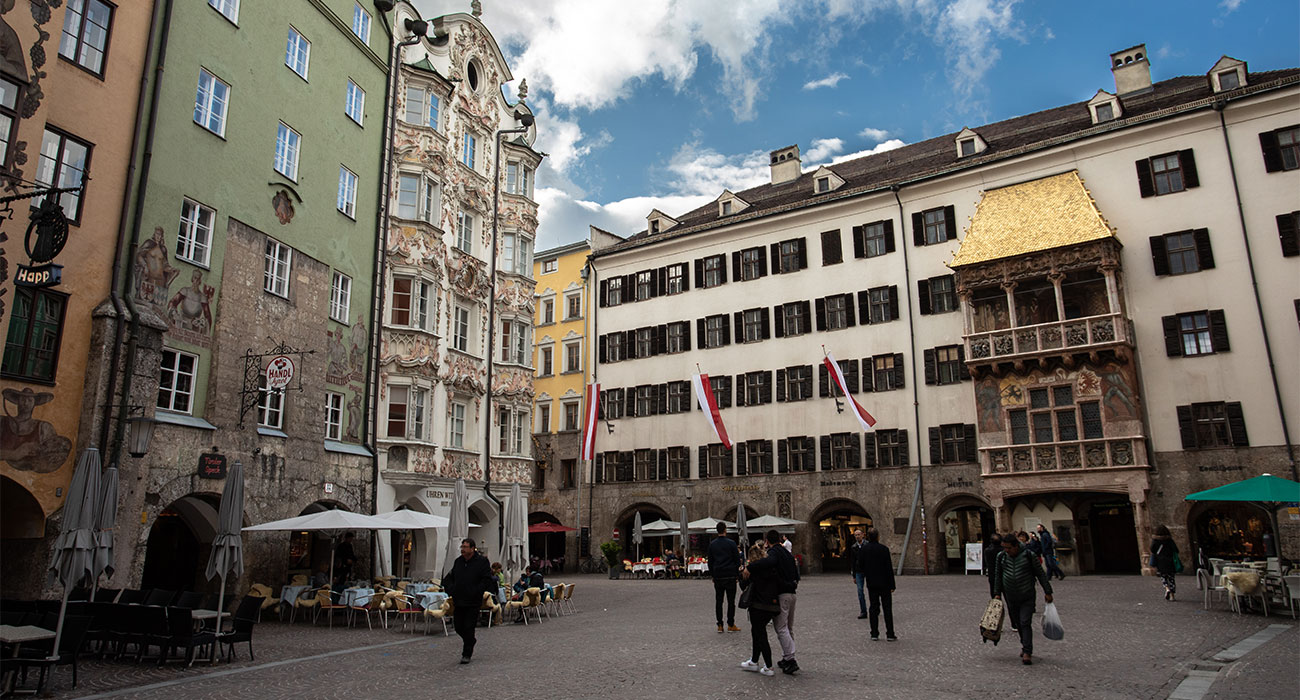 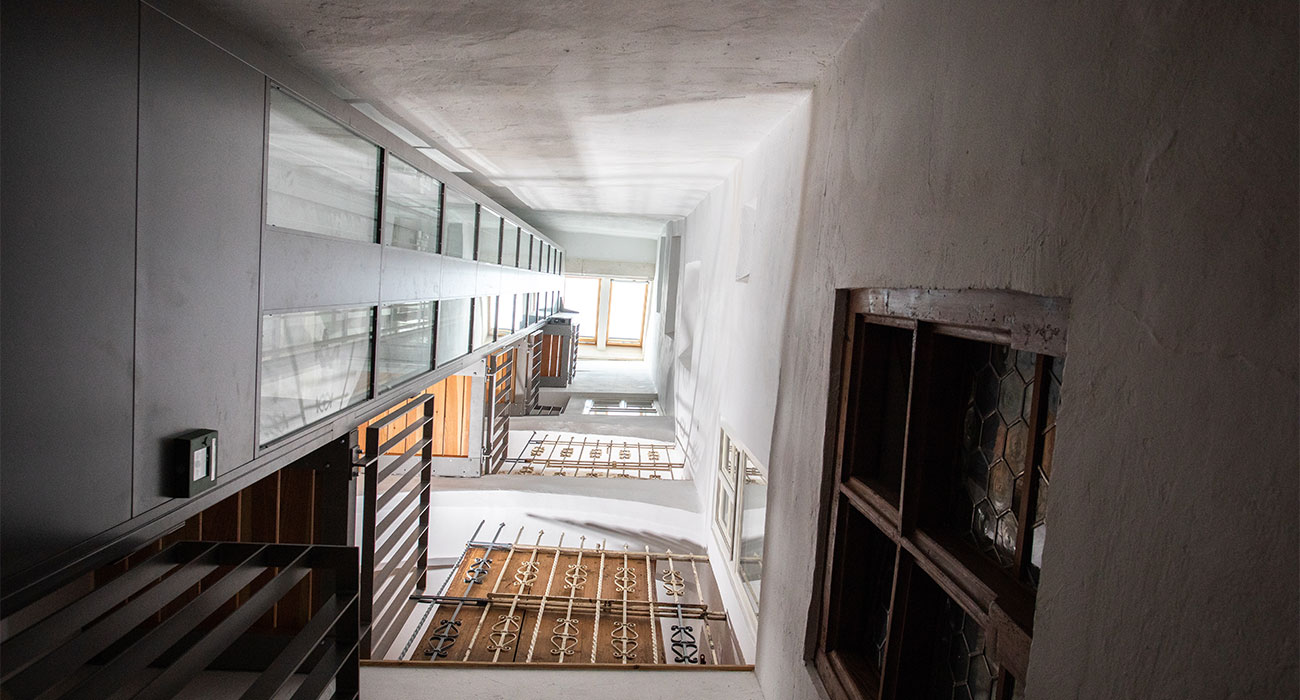 Located on Herzog Friedrich Straße 12, directly opposite the golden roof.

The Herzog-Friedrich-Straße begins at the bridge over the Inn and runs eastwards through the old town. From the Golden Roof, the street opens up into a public square. It then flows southwards from here where it reaches Markt-/Burggraben and the beginning of the Maria-Theresien-Straße.
Just like the compact layout of the entire old town district, the foundations of the Herzog-Friedrich-Straße go all the way back to the 12th century along with the founding of the city. It’s current position and layout date all the way back to the reign of the Tyrolean Counts, with records of the street dating from 1248 at the latest. The street stretches all the way to the ruins of the 1765 “Inntor” in the east and the 1790 “Vorstadttor” in the south
It’s modern day appearance, along with that of our own middle age building located in the centre of it, stems from the very beginning of the modern age. From around 1500, following multiple city-wide fires, many of the houses, previously made primarily of wood, would be rebuilt out of stone in the “Inn-Salzach” building style. With a mix of gothic and renaissance styling, most notably buildings commissioned by Archduke Siegmund of Austria, entrusted to the master builder Türing family, would become iconic of the city. As to create additional living space, the first floor of buildings would often be extended over the street, creating the iconic archways as seen today. It was also not uncommon to decorate buildings with stunning frescos.
Up until the modern era, the Herzog-Friedrich-Straße existed as an important lifeline to the city, providing a route for traffic flowing up from the south (Wilten, Brenner) and into the city. Up until the 16. Century, it served as the only crossing over the Inn within the Innsbruck region. From 1460 onwards, a weekly market was held every Monday along the street running through the iconic old town, after 1679, this was relocated to the market square on Innrain. From 1657 until 1861, following the repeated relocation of the weekly market to the Maria-Theresien-Straße, a market would be held every year in the city square on the 5th-6th December to mark St. Nicholas’ Day. From 1965, a Christmas market (Christkindlmarkt) would be held here every year, the tradition of using this space for the city’s Christmas tree, however, predates this, beginning in the 1930s. Both the Christmas market and the city’s Christmas tree can still be found here every year, located right at the doorstep of our apartments.
In particular the square in front of the Golden Roof as well as our Golden Roof Apartments, has served, since that time, as a location for many public events and exhibitions. In the time of emperor Maximillian, tournaments and performances would be held here as the emperor himself looked on from the window of the Golden Roof. In 1536, it would be here that Jakob Hutter was burned at the stake as a heretic. During the Winter Olympic Games of 1964 and 1976, as well as the youth winter Olympics of 2012, it was in this space that victorious athletes would be presented with their medals.
In 1972 the Herzog-Friedrich-Straße, along with the entirety of the old town, was converted into a pedestrianised zone.